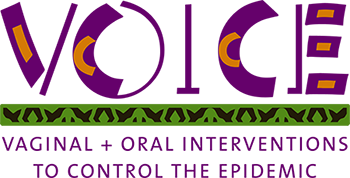 VOICE was a Phase 2B, multi-site, five-arm, randomized, controlled trial. A total of 5029 women were randomized to five study arms in a 1:1:1:1:1 ratio. Secondary objectives focused on adherence/behavioral factors, HIV-1 drug resistance (among those who become HIV-infected during the study), pharmacokinetic parameters, and the potential for delayed seroconversion during an off-product period scheduled at the end of study participation. Additional objectives included exploring the impact of study products on vaginal microenvironment and assessing potential relationships between method of contraception and HIV seroconversion, product adherence, and adverse events.  Version 2.0 of the protocol (dated 31 December 2010) included updates to the sample size, expected length of follow-up on study product, and statistical considerations. The VOICE trial was unique within the HIV prevention field as it was designed to provide parallel comparisons of oral and topically (vaginal) applied antiretroviral strategies for prevention of HIV infection in women. Following the Data and Safety Monitoring Board (DSMB) reviews in September 2011 and November 2011, the oral tenofovir tablet study arms and the vaginal tenofovir gel and corresponding placebo arms were stopped due to futility. The primary results were presented at the annual Conference on Retroviruses and Opportunistic Infections (CROI) held on March 3-6, 2013 in Atlanta, GA. The primary results were published in the New England Journal of Medicine on 5 February of 2015.