REACH (Reversing the Epidemic in Africa with Choices in HIV prevention, or MTN-034, is a study that seeks to understand the HIV prevention needs and preferences of adolescent girls and young women in Africa. Specifically, the study will evaluate how adolescent girls and young women use the monthly dapivirine vaginal ring and Truvada® as daily pre-exposure prophylaxis (PrEP), and their preferences for either or both approaches. REACH will also collect information on the safety of these approaches. 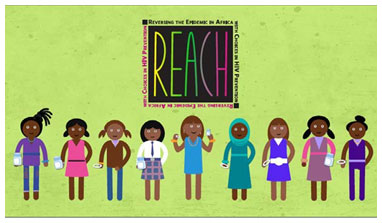 REACH will enroll 300 young women and adolescent girls ages 16-21 – at four MTN-affiliated sites in South Africa, Uganda and Zimbabwe. The study, which began in February 2019, is expected to complete enrollment by mid-2020 and follow-up of all participants by 2021, with results anticipated in 2022.

How is REACH designed?

REACH is a type of clinical trial called an open-label study in which all participants use an active product. In REACH, there are 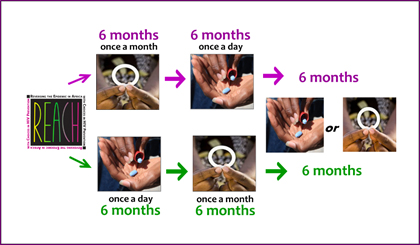 two products: the dapivirine vaginal ring, which is used for a month at a time, and Truvada taken daily, a regimen often referred to as PrEP.

To evaluate the safety of each approach, researchers will conduct medical exams and do laboratory tests of blood, urine and vaginal fluid. To evaluate adherence to and acceptability of PrEP and the vaginal ring, participants will answer questions about their use and experience with each product, both on a computer and in face-to-face conversations with site staff. In-depth interviews and focus group discussions will also help understand what motivates or is challenging about using each product.

Both PrEP and the ring must be used consistently and regularly to be effective – daily for oral PrEP, and monthly for the ring. In previous trials of PrEP, daily pill-taking was especially challenging for young women. And, while the monthly ring helped protect against HIV among women older than 21 in ASPIRE, it was not effective among those 18-21, who did not use the ring regularly. Similar results were seen among 18- to 21-year-old women in The Ring Study. Researchers need to understand the challenges young women face in using these products, so strategies can be identified that can help.

Truvada as daily PrEP is approved in several countries for ages 18 and older, although the World Health Organization recommends it for anyone at significant risk. In some countries, rollout includes those younger than 18. In 2018, the U.S. Food and Drug Administration (FDA) expanded approval of Truvada as PrEP for adolescents – technically, for people weighing at least 35 kgs, a decision based on the ATN 113 study in young men who have sex with men in the United States. Though the FDA decision is very encouraging, African regulators will likely need more data about PrEP safety in young African women. Results of a study, called HPTN 082, which involved young women ages 16-21 in South Africa and Zimbabwe, found no safety concerns with PrEP but that many of the participants struggled with daily pill-taking. The study’s results, which were reported in July 2019, suggest more support is needed to help young women to keep using oral PrEP. To date, there is no safety data on the dapivirine ring in younger African women; however, a safety study (MTN-023 /IPM 030) conducted by the MTN among 96 girls between the ages of 15-17 in the United States, found the ring to be acceptable and well-tolerated. The study’s results, which were reported in 2017, also showed that adherence to ring use was high.

REACH will add to these data by contributing important information about both PrEP and the dapivirine ring in African adolescent girls and young women.

What exactly is the dapivirine ring?

The dapivirine ring is similar to vaginal rings commonly used for contraception except that it contains an ARV drug, dapivirine, instead. Dapivirine belongs to a class of ARVs called non- nucleoside reverse transcriptase inhibitors (NNRTIs) that prevent HIV from making copies of itself. The ring, which is made of a flexible material, sits high inside the vagina, where it slowly releases the drug over the course of the one month the ring is worn. Women can insert and replace the ring themselves.

Click here to watch a short video about REACH. Additional information about REACH can also be found at https://mtnstopshiv.org/reach-study and www.mtnstopshiv.org/news/studies/mtn034. To learn more about the dapivirine ring go to www.ipmglobal.org/.